We begin with the first few days in Lhasa as per the basic itineraries outlined above (Major Monasteries). Then we move to the famous retreat cliffs of Drak Yerpa and on to the monasteries of Taklung and Reting. Both of these were important religious and political centers in their heydey, but now are rarely visited and survive in strikingly beautiful and secluded valleys.

From Reting we head up to the Chang-tang, “Northern-plains” to camp beside the stunning lakeside retreat caves of Tashido. This site is perhaps one of the most dramatic in Tibet, with the vast lake stretching to the western horizon (they say it’s still possible to see dragons leaping out during thunder storms) and broad grasslands climbing south to the base of sacred Mount Nyenchen Thangla. During summer months this area is also a migratory stop for several species of birds, including the rare black-necked crane.

After Namtso we take an unusual back road to Shigatse and visit Yumdruling, one of the few active Bon-po monasteries in Central Tibet. From here we head straight to Mt. Everest and camp near the famous Rongbuk monastery at its base. The next day we will have time to make the walk up to base camp and re-visit the site of the famous Mallory expedition — a must for any mountain lover.

A final drive across the high Tingri plain and over our last pass with views of the Himalaya, appearing almost as if below us, will take us to Nyelam. From here it is a steep but short descent to the Nepal border the next day.

This route will take us through some interesting areas beyond the reach of the major monastic institutions. Namtso and its surroundings is known for its active nomad culture and spirit.

Mountain enthusiasts will also want to look into the history of this highest of mountains, Mt. Everest. There have been a series of articles leading up to the 50th anniversary of Norgay and Hilary’s summit ascent in Outsidemag. 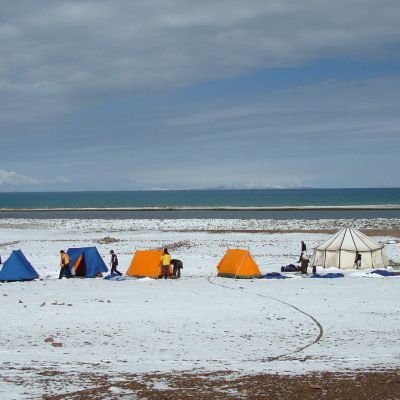