We will meet your flight arrival at Lhasa airport and make the hour and half transfer directly to your hotel in Lhasa. The next days will include visits to the major temples, palaces and monasteries of Lhasa and we will arrange specific times with you upon arrival. The Jokhang is the most sacred of all temples in Tibet is also the heart of Lhasa. Pilgrimage to see the Jowo statue within this 8th century temple is perhaps the most important journey any Tibetan can make. The bustling marketplace surrounding the temple can provide hours of friendly and fascinating wandering. The towering Potala Palace was the religio-political nexus of traditional Tibet, as well as the winter residence of the Dalai Lamas, and it will take a full morning to ascend and explore. Drepung and Sera monasteries, two of the largest monastic complexes in the world (housing well over 6,000 monks each in their heydey) require an afternoon each to explore. There are also numerous smaller temples, monasteries and nunneries tucked within the old town of Lhasa or the hills around and we can explore according to your interests.

On the fourth day we drive the old road to Gyantse which runs alongside the sprawling lake of Yamdrak-tso, over two passes, and past looming glaciers. The next morning we will have time to see the fantastic artwork and architecture of Pelkar Chode monastery and its associated Kumbum temple. We will also visit the unusual Shalu temple on the way to Shigatse and its magnificent Tashilhumpo monastery. Then we will return to Lhasa on the 6th day via the more direct route running through the Tsangpo canyon.

Finally, on the day before departure, we will travel through the desert sand dunes on the north bank of the Tsangpo to visit Tibet’s first monastery — Samye. This unusual temple complex was founded by the historic cooperation between King Trisong Detsen and the great Tantric master from India, Padmasambhava or Guru Rinpoche. On the same day we will be able to see the site of Yumbu Lhakang, the ridgetop residence of Tibet’s early kings. The next day it is an hour drive to departure at Lhasa airport. 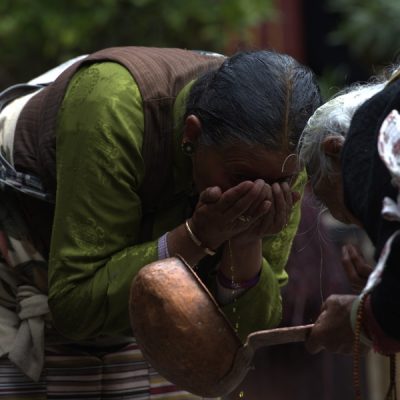